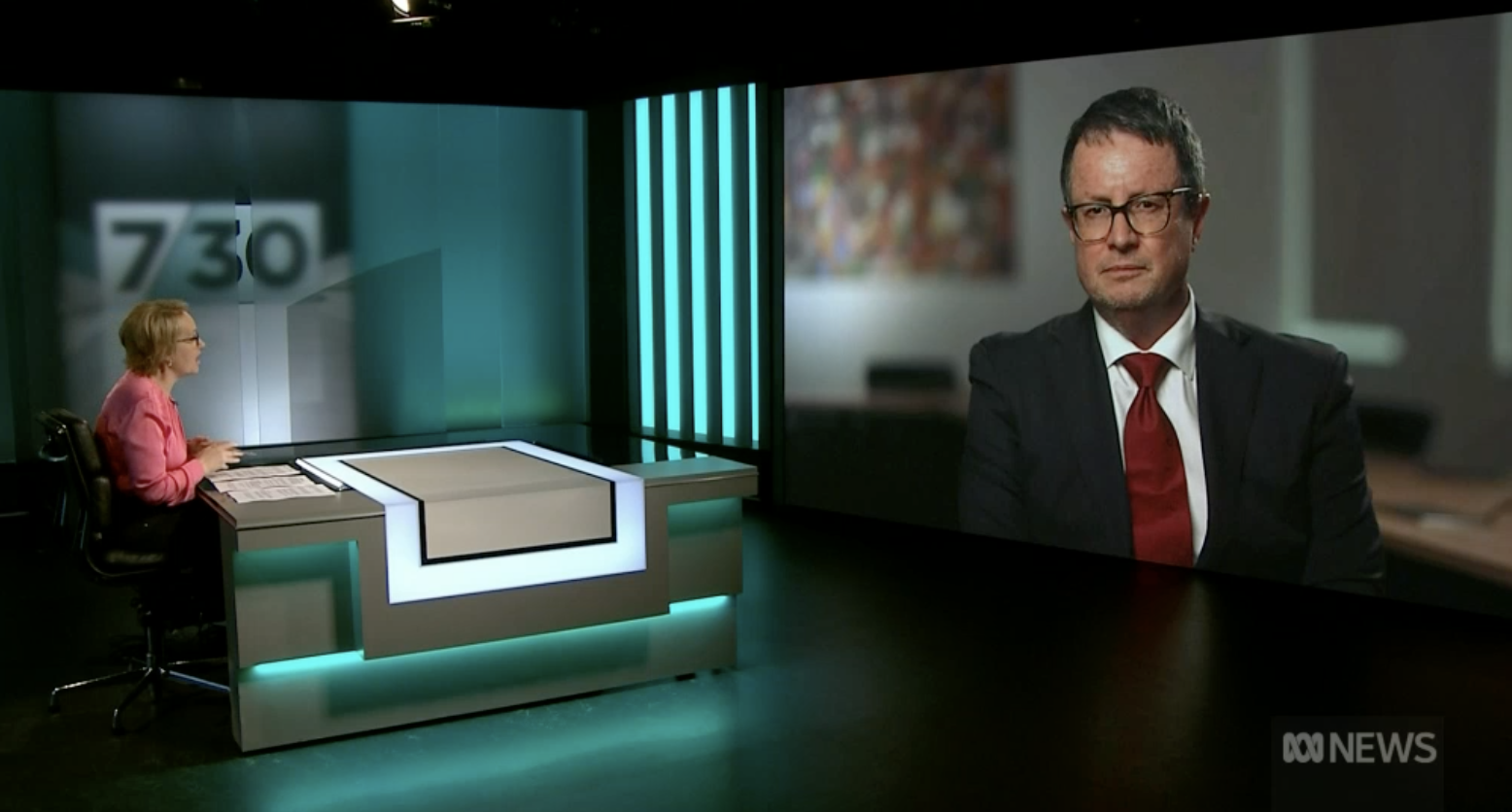 The veracity of Nine newspapers’ and the ABC’s Medicare rorts series of stories this week rely on one massive number: so where did that $8 billion figure come from?

At no point this week did either media outlet tell anyone in any of their stories or interviews how to get to the $8bn. There was no data produced, no simple algorithms putting together any logic, not even a loose  narrative of how they might have got there.

We should have gotten to this crucial point on Thursday night when newly minted AMA president Professor Steve Robson faced off with 7.30 presenter Sarah Ferguson who asked if he had read Dr Margaret Faux’s PhD*.

Professor Robson, hopelessly unprepared, said “not all of it”, and at that point doctors around the country must have breathed a collective sigh of despair as his performance significantly exacerbated the fantasy that Nine and the ABC were peddling.

If he had just read the abstract of Dr Faux’s PhD he would have noticed this immediately:

Leakage from Medicare caused by non-compliant medical billing is currently estimated at 5-15% of the scheme’s total cost ($1.2-$3.6 billion annually)

He could have asked Ferguson “did you read it?” because it feels pretty obvious she or her producers hadn’t read it if for a week they had been peddling a line that there is 30% rorting.

Even a quick flip though the pages of the PhD would have revealed a lot more that is damning of Nine and the ABC in major ways and would lead anyone to ask the questions:

So did Nine newspapers and the ABC read Faux’s thesis?

Unfortunately Professor Robson came across a little like the ex-aged care minister in the Morrison government, Richard Colbeck, when he didn’t have a clue how many people had died in nursing homes from covid, i.e., not well.

The answer he should have been prepared with is that there is nothing to debunk.

The PhD doesn’t mention 30% and the 5-15% it does allude has no calculation or logic provided. It’s a figure published out of thin air based on a PhD flush with anecdotes of bad-actor doctors, most of which come from cases the government has already caught and acted on.

The whole thing is a stitch-up.

We asked the chief reporter from Nine, Adele Ferguson, and Dr Faux directly this week to produce any sort of calculation or narrative that could get you to $8bn. It was a pretty simple question. The sort of question either of the Fergusons might have put to Dr Faux:

Where did you get the $8bn figure? In order to come up with such a significant figure I’m going to assume you [Nine] or Margaret worked off data, and have some form of algorithm which references that data. Can you please send me what that data and those algorithms are [or even a narrative] so I can understand this much better?

We have no answer from either Nine or Dr Faux despite sending the questions on Wednesday and following them up yesterday.

I’m going to suggest the very obvious reason they didn’t get back.

There is no calculation. There isn’t even a rough narrative to get you there. There is nothing in the PhD so why would there be anything outside it?

Other questions we asked which they would not answer include:

The “hard evidence” that the Nine story is relying for the $8bn is that Dr Faux told them so, and she has a PhD, and that Dr Tony Webber, an ex secretary of Health and PSR director, corroborated it.

There is of course no information on how Dr Webber actually corroborated Dr Faux’s estimate or whether he even read the PhD.

Within quick time a couple of GP media outlets have laid bare how badly biased the Nine and ABC reporting has been in respect to the corroboration of the material.

The immediate past head of the PSR, Professor Julie Quinlivan is quoted in Medical Observer saying the $8bn is “fake news”.

Ex-health secretary and prominent health economist Professor Stephen Duckett told newsGP that at no point in his near 50-year career working in health administration has he seen any sign of malfeasance or carelessness occurring at such a scale.

“I’ve seen no evidence that the fraud is at that $8bn level … it would have to be endemic to get to those levels and I just don’t think it is,” he said.

How is that Nine and the ABC aren’t asking prominent and obvious other experts about the $8bn number?

We asked the Department of Health, the only ones who actually have all the Medicare data and who can, largely, identify significant fraud in the data via sophisticated data matching technology (they can’t identify it all of course … if a doctor puts down a B instead of an A consult, you can’t always catch that), and they confirmed that using the actual data you can’t get a figure of $8bn, not even remotely close.

You might find this worrying as a general fact, but in this instance it’s possibly comforting: that the DoH, borrowing from other increasingly data-obsessed federal government departments, has a highly advanced and constantly evolving data-matching skill and technology base. And not only do they have all the Medicare data to work with, they can at times match with other departmental data to get to the patterns they need to identify fraud. We’ve written about it. It’s getting scary.

Nine and the ABC never had any data.

Worse, it’s apparent they didn’t even ask for any data or chase down the numbers with the DoH. They certainly didn’t ask the DoH for any data in relation to their $8bn claim because they didn’t reveal this allegation to them prior to the story, according to a DoH spokesperson.

Both organisations have relied on a series of one-off events of “bad actors”, guesses, anecdotes and, we guess, extrapolation by Dr Faux.

And for some reason Dr Faux, who very clearly has made her position in the past that bad actors are not a meaningful part of her theory of up to 15% leakage, got on the Nine and ABC bandwagon and happily rolled out some dreadful (and well known) one-off examples that would catch the public’s eye.

The $8bn is at best a very bad guess, meaning the story is manifestly wrong.

But that’s not the main problem here.

The story has been published within weeks of a federal budget, where money has never been tighter, and the situation of certain doctor groups, most particularly GPs, has never been more dire.

The ABC and Nine have driven a stake through the credibility of the medical profession weeks out from a budget where the government wants to act on starting to get the GP profession back on track somehow, and in doing so, put enormous pressure on the government not to give GPs too much.

Unfortunately the AMA has compounded the problem by allowing a very naïve and green new president to face off with probably the best interviewer in the country, Sarah Ferguson, unprepared.

What a dreadful mess.

What a disgrace on the part of the two media organisations in this country we thought we could trust with doing the right thing in terms of journalism.

The mess is going to blow straight back in the face of the public in an increasingly stressed GP sector, and a more rapidly degrading healthcare system.

Once the big number at the centre of this story is debunked then a lot of the lesser parts of the story, which don’t add up as you read, start to make a little more sense. Nine is starting with a very big claim ($8bn) which is relying on a very thin premise (the word of two alleged experts) so they are decorating it with lots of small emotional and anecdotal stuff (much of it outdated or wrong) to give it colour to help make the idea fly.

Here’s a few examples of that:

The opening line of the original Nine article says quite a lot about this episode when you look back at it [our emphasis]:

There is no definition of the term rorting which involves the concept of making a mistake. Rorting is something that is planned and intended. The opening Nine sentence is actually nonsensical. It goes to how confused Nine is at the outset about this piece.

When we asked Nine what they meant to say and how much of the $8bn they had actually calculated was a “mistake”, and how much was  a genuine “rort” (i.e. deliberate) – we feel it’s a pretty important distinction when you’re potentially imputing the reputation of one in every three doctors in the country – they wouldn’t say.

So the bad grammar and sentence construction doesn’t seem like it was just a tired subeditor.

The damage and the awful irony here

If no one has picked up the awful irony here as far as GPs are concerned then ask yourself: what if the 30% was somehow real – say by leakage and mistakes?

So we fix that up and what happens?

It wouldn’t be any reason to not clean up waste, sure, but it sort of highlights the real issues we are dealing with here.

GPs are at their most stressed point in history.

They are in crisis.

If the ABC, Nine and Dr Faux are feeling proud of themselves this week then they might want to stop and think about how much their baseless and fantastical claims affected doctors on the ground out there.

The answer is a lot.

We have a lot of distressed incoming mail and some of it makes you want to cry.

There’s an understandable and visceral disbelief that they can be turned on, so viciously, so quickly, with so little evidence, after putting in how much they’ve been putting in over the past three years.

There is widespread despair and distress and this series of stories, which has resonated with the public, and is being believed by the public, has created a significant additional mental health burden on a lot GPs out there.

It’s palpable and significant damage to our GP sector.

It’s not OK to do that based on some guesses of one person and their PhD because it makes a sensational headline.

We’ve now written to the ABC with the above material and the obvious questions.

We will get back to you on what they say.

*Dr Margaret Faux has been a regular contributor to Wild Health’s sister publication The Medical Republic on the topics of Medicare complexity and PSR overreach. Dr Faux will write again next week to defend herself from the criticism she has received for her part in this week’s reporting, and by mutual agreement that will be Dr Faux’s last column for TMR for the foreseeable future.